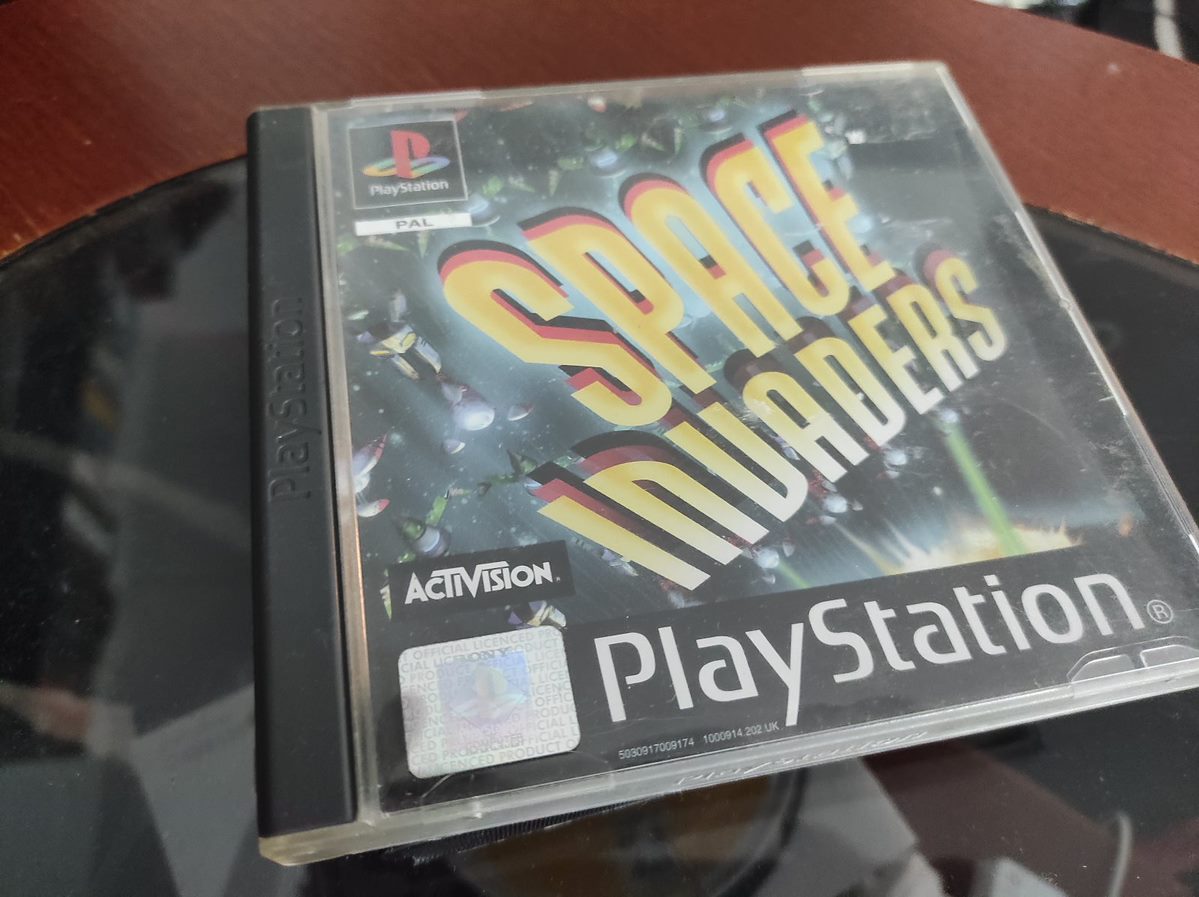 Since I recently played Space Commanders, that is a Space Invaders clone for PC, I decided to pick up this PS1 game titled also as Space Invaders. I bought it some time ago but I haven’t really played it.  The price of this game was low. That’s one reason I decided to buy it. Back when I made the decision to buy this game I had already many items in my mind that I wanted to order. It kind of came with the other stuff that I ordered.

It is basically the same game that especially retro game fans know. The original game was released in 1978 as an arcade game and it was also released for Atari 2600 in 1980. Graphics have been improved for this PS1 release. It doesn’t introduce three-dimensional graphics. There is also some slight modifications made in the game play. Activision was the publisher of this PS1 version of this game.

All in all this is  a nice little game. It didn’t keep me playing for a long time. It is although interesting to me at this time of my hobby as a game enthusiast. It is  not difficult to figure out why this game was popular when it was remade for PS1.

As I read the Wikipedia page of Space Invaders I realize that there was a big difference in the arcade version and the console (Atari 2600) version of this game. During that period gaming consoles located at home weren’t as powerful as specially crafted devices that were placed inside arcades. I really don’t know much about their technology.

Things like game consoles and computers are things I know a bit more about. If you are interested in arcade machines and games you could play with them you might want to check this site: https://www.mamedev.org/

What is the true meaning of highscores in video games? I may not have so accurate details but I can tell you my points and views on this issue. I sure do have experiences about playing very different kinds of video games…or computer games (What would you call them?) in arcades and in a living room. So let’s dive in.

To me high scores haven’t been so important. Today we have characters inside games that have a lot of features which is telling about the diversity of todays games. There is more data moving while you play. But back in the age where Commodore 64 was the best there was a different time.

So high scores in games like these were actually very important and they told the player a lot about how they were doing in the game and how much they had progressed. And if you were playing in an arcade and you had a high score on some machine it was a good way to build a reputation for yourself (or actually for your nickname or anything that could be displayed on the list as a name back then).

Today, we have so many measures to discuss about your character in your favourite video game. For example you have experience points. Many modern games have these features that were introduced in the form of role playing games. They are now mixed with sport games so they have a character that can develope it’s abilities. Games have become more complex as the power of the systems has increased.

Sometimes I don’t feel like playing the newest games. Then it’s time for me to get relaxed playing some retro games that are somewhat more simple. That’s why I like these old games. And it also takes me back to feel some nostalgia.

There is a genre of video games that is called “shoot-em-ups” or “shmups” for short. These shooter types of games have been in my mind since I was a child. I am not sure where I picked up these memories. It was probably from some arcade, restaurant, bar or some other place that I spotted a game or few that were about space, shooting and monsters. The game I have in my mind, or the memory of it, takes place in some space related environment. There are blinking dragons and a flying star fleet ship that is shooting that thing.

Of course this isn’t any real game. It was some unknown game that I had seen somewhere. It is however true that there were games like this, space shoot-em-ups, in the end of the 80s in arcades (for example). When the hottest gaming device was Sega Mega Drive they marketed the gaming console with a promise that it would bring arcades to living rooms of our homes. Maybe the graphics weren’t as impressive but they were something at that time. They were a bit more detailed than those NES games we had seen some years earlier. And the sound that was generated was better in pure quality also.

The screenshot that is related to this  blog post is taken from a game that is called Gynoug. I’m not sure if it is qualified as a space shoot-em-up but it for sure is a shoot-em-up. This game represents the genre. Playing this game can give some view about the it. It is often said that Mega Drive games are hard to play and that they repeat themselves a lot. I am mentioning also the fact that there was no way for the player to save the game and this caused the game usually to be very repetitive. I can understand this better when I think about what kind of a deal it was to design and program a game in 1990s. So the game development methods weren’t as advanced as nowadays. Maybe someone should desing more new games for Mega Drive today?

The influence these games gave to the whole industry of game development is undeniable. The key to success inside space shoot-em-ups is to move to correct direction at correct time and shooting all of time and accurately. I can already see how programmers coded the behavior of the monster you are shooting. Often you can recognize the pattern. Then you move according to where you see you have the position that enables you to not get hit by a missile or any other particle that is headed at you. This can be fun. Nowadays you do see the limitations of the games designed in the past. Althought there is a lot to learn from these games. I definitely recommend you to play some shooter game like this. This game can be Zero Wing, M.U.S.H.A. or Gynoug but there are also other good ones.